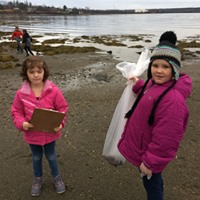 When students at Sedgewick Elementary School and Chebeauge Island School had questions about the amount and type of trash found on their local town beaches they discussed protocols for collecting data, and then went out on a regular basis to collect, weigh and classify the trash that they found on beaches.  Then they input the data on the WeatherBlur.com platform and commented and discussed what they found.

Watching these students collect data is a wonderful experience.  Students are enthusiastic to be involved in a locally-based scientific investigation.  It is an extremely positive experience to see how they own the investigations because they have initiated the topics of study. 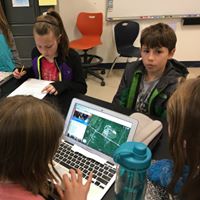 Other investigations have included capturing photos of a king tide, discovering if microplastics can be found on local waters, examining maple sap production after a drought, collecting light data from buoys, measuring and classifying beach pebbles and local weather observations.

WeatherBlur is currently funded by a three-year cyberlearning grant from the National Science Foundation.  This grant allows educational research on how students learn by being involved in a non-hierarchical, online-based, citizen science program.  The researchers are deep in the analysis of all the data collected over the last few years which will be disseminated later in the year.