Expanding the Future of the Maine State Science Fair

On October 26, 2015, Maine Mathematics and Science Alliances Reach Center, The Jackson Laboratory, and the Maine STEM Council brought together a diverse set of business and research organizations to broaden the impact of the Maine State Science Fair. This first-ever meeting will help the organizers of the Fair expand recruitment efforts and engage more students from more schools statewide more deeply in the research event for high school students. 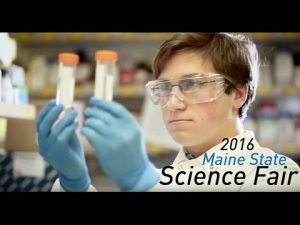 Opportunities to conduct original research during the high school years matter. Students with these skills are in demand, and will make Maine and Maines businesses stronger, said Jan Mokros, a member of the Maine STEM Council and a senior research scientist at MMSA. This is the premier research event in the state for these young scientists and engineers, and its an unknown gem. We believe that the science fair is a key opportunity for many students to conduct original research and to present their findings.

MMSAs Reach Center project and The Jackson Laboratory organize the annual Maine State Science Fair. The MSSF was part of Maines first Science Festival in 2015, held at the Cross Insurance Center in Bangor, and will again be part of this larger event on March 19, 2016. This integration with the broader public science festival and greater outreach reflect a new focus on STEM education in general, and original scientific research and the engineering design process in particular.

The lively conversation included discussion of whether science fairs are seen as old school or are fading away. The importance of including these kinds of original explorations to develop STEM skills in high school was given as a significant reason to renew efforts to support a thriving state science fair. This is a complement to, rather than in competition with, such online competitions as the Google Science Fair.

Maine should not be noted for its absence, said Jill Goldthwait, former Maine State Senator who now works at The Jackson Laboratory. Both the students and the entire state benefit from our participation in ISEF and supporting STEM education in and out of school to develop talented, passionate, exceptional Maine citizens.

The 2015 Maine State Science Fair included over 150 students from over 15 Maine schools. Since 2012, winners of the Maine State Science Fair have been eligible to qualify for the Intel International Science and Engineering Fair, the worlds largest science fair, with the top three winners and their mentors traveling to the event. Maines finalists did exceptionally well at ISEF last year, with all three Maine projects earning their creators prizes including scholarships, cash prizes, and category awards.

This is the best showing to date of Maine students at this prestigious international event, says Michael McKernan, Jackson Laboratory program director for STEM and undergraduate education, who traveled to Pittsburgh with the students and their mentors. It demonstrates how our Maine students can compete at the highest level when their schools encourage excellence in science, technology, engineering, and math.

A video created at the 2015 MSSF, available at http://maine-state-science-fair.org, includes highlights and showcases not only winning students and their projects, but also many first-time participants and their comments about the value of the science fair to them and the future of research in Maine.

The 2016 Maine State Science Fair will take place on Saturday, March 19 at the Cross Insurance Center in Bangor. Registration is open until February 5. The Fair is open to students from all public, private, parochial and home schools (grades 9-12) throughout Maine.

Other important take-aways from the October 26 meeting included the importance of the event to businesses, which do pay attention to these activities and even track participants for future employment possibilities.

Development of an advisory group for the MSSF that will build on this first meeting and continue to grow the support structure and broaden the impact of the MSSF is underway. Other ongoing efforts that arose from this meeting include identifying and supporting identified champion teachers to bring more schools to the Fair, working with the Maine State Chamber of Commerce to share how and why members should support local schools in participation, and connecting with more businesses to encourage their employees to serve as judges and mentors and to support the participation of their own children and those they know.

MMSA is also investigating the development of a research course for teachers to help them learn how to set up and do research in schools.