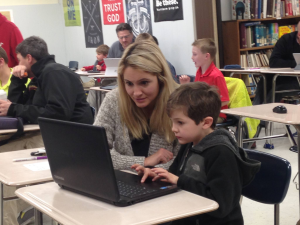 Each December, hundreds of thousands of youth complete an Hour of Code during Computer Science (CS) Education Week.  Students of all ages, languages, and reading abilities learn to code using programming tutorials ranging from Minecraft to Javascript. This year, MMSA joined in the fun, but with a twist.

Renee Charette, MMSA’s Experiential Math Specialist, returned from this summer’s Computer Science Teachers Association conference excited about something called Family Code Night (FCN). Designed by a parent in California, FCN unites children and their parents to do their first hour of code – together. Family participation is a simple but profound innovation in this event – it changes the trajectory of a child’s CS learning and the family’s appreciation and support for that learning.

MMSA’s Reach Center project saw this as the perfect melding of computer science and out-of-school STEM learning, and launched a Family Code Night effort for Maine in September. Reach set big goals: at least one event in each of Maine’s 16 counties, with at least 1,000 children and parents doing an hour of code during CS Education Week.

MMSA staff reached out to their project participants in schools, libraries, and afterschool programs, asking educators to sign up to host Family Code Nights. Each registrant attended a short training webinar and received an Event Kit, chock full of planning, marketing, and implementation resources provided by FCN. Reach Center staff helped host sites by promoting their events and giving general support throughout the fall.

MMSA was amazed by the response: 54 schools, 13 afterschool programs, 13 libraries, and 3 community organizations planned Family Code Nights. Reach met its goal of at least one FCN hosted in each county, with Cumberland, Washington, and Oxford counties having the most events. More than 1,000 children and 800 parents attended these events statewide!

The numbers are impressive, but the stories are the most impactful. A 10-year-old girl in Appleton wrote, “I learned that coding wasn’t as complex as I thought it was. I also learned that coding can be fun.” A mom in Farmingdale reported that her 8-year-old son went straight to his school library the next day to get a stack of coding books. When asked if she would do any more coding, a 9-year-old girl from Bethel grinned widely and said, “definitely!”

If you missed out on hosting a Family Code Night during CS Ed Week, contact Stefany Burrell to plan an event any time of the year. Reach Center will continue supporting host sites and will even supply USB wristbands for children who take part in Family Code Night (while supplies last).

If you already hosted a Family Code Night, consider introducing your students to Scratch, a block-based coding language. Start them out with tutorials and then let them develop their own projects. Encourage them to browse projects made by members of the Scratch Community. They’ll be amazed at all the things they can do if they learn to code.