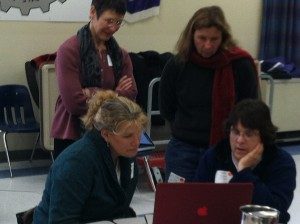 There are two major goals of FCD; first to build a deep understanding of the Common Core Math Standards, the Common Core English Language Arts Standards, and the Framework/Next Generation Science Standards, especially as it relates to practices or capacities; and, second, to build a community of practice among those who provide teacher pre-service or in-service professional development in math or science, especially the leaders of state and federal MSP’s.

MMSA received a small Title IIB Math/Science Partnership grant, federal funds directed by the Maine Department of Education, for the project. The first planning meeting on November 27, 2012, with all of the state MSP’s leaders, set the agenda for this leadership project.

On a snowy day in January, some thirty educational leaders gathered to participate in the Fewer, Clearer, Deeper: An MSP to Build Coherence in Maine meeting at the Capitol Area Technical Center. They learned about tools to understand and implement the Common Core – Math standards and the framework/Next Generation Science Standards from Lisa Marchi, engaged in an activity emphasizing the overlap of the practices and/or capacities from the Common Core-Math, Common Core-ELA, and the framework/NGSS, and shared information and announcements about their current and upcoming work. Attendees were from the schools around the state including Ashland and Camden, University of Maine at Presque Isle, University of Maine at Farmington, University of New England, Unity College, Husson University, Project Learning Tree, Project WILD, Maine Audubon, Maine 4-H, the Maine Math and Science Alliance, and the Maine Department of Education.